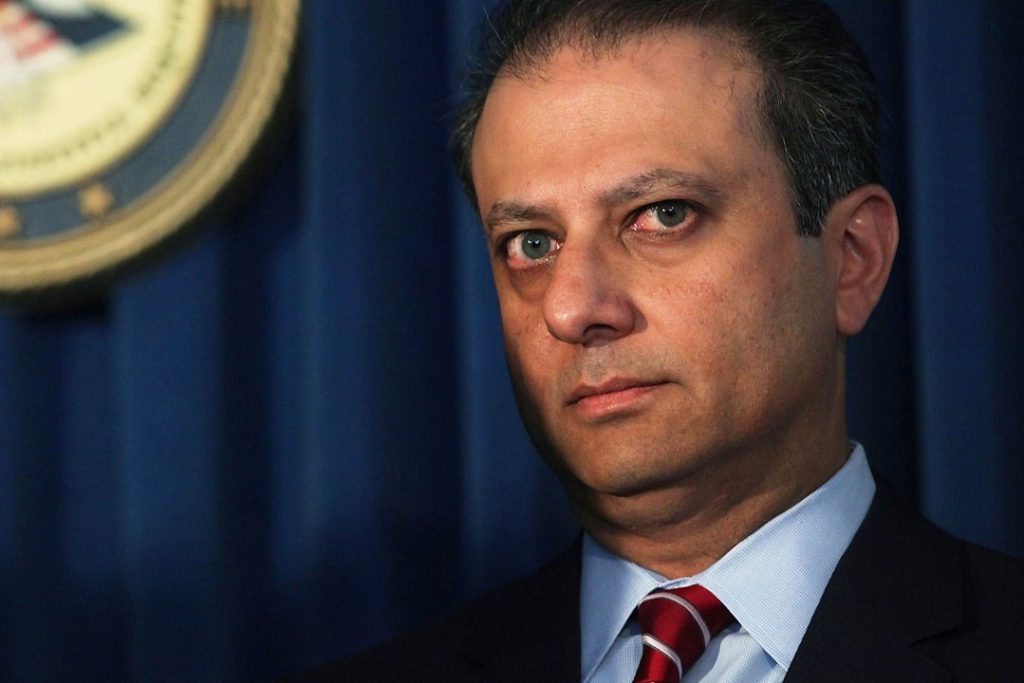 VINOO VARGHESE is a criminal defense attorney and a former prosecutor who defended multiple high-profile cases against Preet Bharara.

Arrogant. For once, I’m not referring to our 45th President, but instead to Preet Bharara, the man referred to as the “Sheriff of Wall Street” and the “Showman Prosecutor.” He made a spectacle out of the fact that he was fired—though it is normal for a new president to fire sitting US Attorneys. President Clinton did this, so did President (W.) Bush, and so did President Obama. To many, Bharara is a hero for not resigning and instead demanding to be fired.

Bharara isn’t a hero, unlike Sally Yates, who President Trump fired because she refused to follow his patently unconstitutional travel ban. Bharara’s demand to be fired while everyone else submitted their resignations was classic Bharara—the Showman.

The media classified Bharara’s firing as another example of this President’s awful judgment (which there are plenty)—but this was just normal politics. The US Attorney is an “at-will” job—serving at the will of the sitting president. Here, even if President-Elect Trump had asked him to stay on—President Trump’s will changed—too bad for Bharara but good for the public. Bharara seemed to forget that he worked at-will or simply chose to ignore it since he believed himself bigger than the position he held for nine years.

Many of us who believe in criminal justice will not miss Bharara. While he was a media darling, to others, like me, who defended those he chose to go after, he was just a bully. He presided over an office with unlimited resources that could pick and choose his targets with impunity. His press conferences were spectacles, by which he polluted jury pools and created hostile atmospheres, making it nearly impossible for anyone accused to receive a fair trial. He was indeed a Showman.

For example, in one such press conference, Bharara, the Showman, claimed that a former client of mine, Rengan Rajaratnam, who he accused of insider trading, shared the same DNA for criminality as his previously convicted brother, Raj Rajaratnam. Bharara had no problem claiming Rengan was predisposed to committing criminal acts, but where was Bharara’s apology to Rengan when a jury found him not guilty of all charges? Don’t hold your breath—it didn’t come. Arrogant. Later, Bharara called Judge Naomi Reice Buchwald, who presided over Rengan’s acquittal, “‘the worst federal judge’ he’d ever encountered.”Arrogant. Sore loser.

Another federal judge, Richard Sullivan, questioned whether one of Bharara’s bombastic press conferences served any meaningful law enforcement purpose. In this one, Bharara disparaged another former client of mine, NYC Councilman Dan Halloran. Judge Sullivan said Bharara’s comments announcing Dan’s arrest “sound[ed] like the theme from Mighty Mouse.” “This seems to be designed for tabloid consumption,” Judge Sullivan said, adding, “there should be a question asked that is that appropriate at the preconviction stage.” The judge harkened back to his days as an assistant U.S. attorney, saying there was a time when prosecutors would just state what the charges were and not editorialize on the matter.Bharara had called Dan the “quarterback” of a “smorgasbord of graft and greed.” As Judge Sullivan noted, Bharara was editorializing for the tabloids.

Bharara’s press conferences served no legitimate law enforcement purpose—instead he used them to poison jury pools and embarrass those he charged into submission—just like Rudy Guiliani did when he was US Attorney. No prosecutor should be a “Showman,” not when he controls the biggest bully pulpit (next to our current President).

Jury trials are rare, and unlike Bharara, the overwhelming majority of people charged don’t have the resources to go to trial. The lack of jury trials isn’t what our founders envisioned when they made that right part of our Constitution.

Just a few weeks ago, however, Mr. Yifan Kong and Ms. Erxin Zhou, a husband and wife who are Chinese immigrants, took Bharara’s office to trial. Bharara had used civil forfeiture laws, aka organized government theft, to seize 47 luxury cars and $3.5 million from this couple’s Memphis auto-dealership. He claimed they were engaged in deceptive business practices. Before trial, their lawyers had urged Bharara to drop the case because then US AttorneyGeneral Eric Holder (not Jeff Sessions) had issued guidelines recommending dismissal. Instead, Bharara refused to follow Mr. Holder’s directive. Again, Bharara thought he was bigger than the position. Arrogant.

Mr. Kong and Ms. Zhou, who were trying to run a legitimate business, were forced to go to trial and prove they did nothing wrong—and won! They had the resources to stand up to a bully like Bharara—sadly most don’t. Again, no apology from Bharara. Arrogant.

Bharara, like all the other dismissed US Attorneys, served at the pleasure of the President. On his way out, he couldn’t grasp that he wasn’t bigger than the position he held, and decided to make a Showman’s spectacle of it—again. Arrogant. I’m sure Bharara now can focus on his next political gig, i.e., mayor, governor. Hopefully, he will embrace that position with a little more humility, and be less of a Showman—the public will be better served for it.