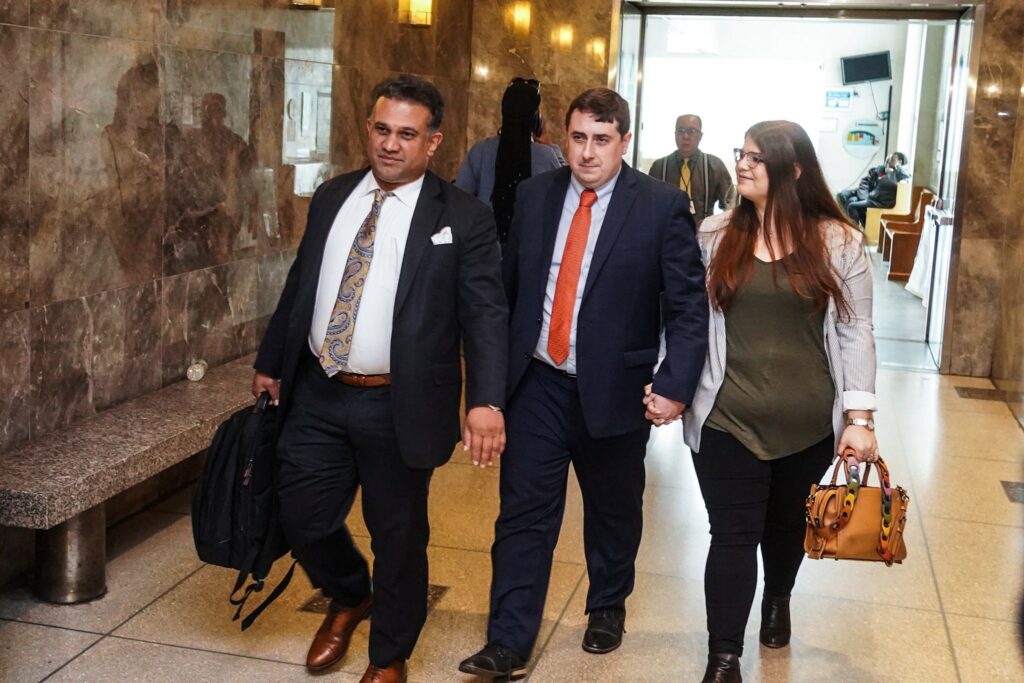 It took only five hours for a jury to convict a Brooklyn man this month in the high-profile slaying of Karina Vetrano, whose badly beaten body was found partially clothed in a Queens park after she had gone out for a late-afternoon jog.

Then one of the jurors in the case came forward to say he was improperly pressured to convict the defendant, Chanel Lewis, of first-degree murder and sexual abuse. Based on the juror’s sworn statement, Mr. Lewis’s defense lawyers accused other jurors of misconduct and asked the judge to throw out the verdict.

On Monday, the judge rejected the request for a new trial after a highly unusual two-hour hearing in which three jurors testified about their deliberations. “Motion denied,” Justice Michael B. Aloise said, without explaining his reasoning.

Mr. Lewis is scheduled to be sentenced on Tuesday morning. He faces life in prison without parole. He confessed to beating Ms. Vetrano, and traces of his DNA were found on her body. The defense argued his confession was coerced and the DNA evidence was unreliable.

Christopher Gooley, the juror who had come forward, said he was the final holdout against finding Mr. Lewis guilty and had accused other jurors of violating the judge’s orders not to discuss the case before deliberations. He said that on the second day of the trial, after Ms. Vetrano’s parents had testified, the foreman told him that his mind was made up.

In an interview, Mr. Gooley said he had deep misgivings about the verdict and still harbors doubts about Mr. Lewis’s guilt. He spoke to The New York Times on Saturday, and the newspaper granted him anonymity until his name was revealed in open court.

“This is bigger than Chanel Lewis,” he said on Saturday. “I’m standing up to the system. Showing people what the inside of a jury room is really like.”

The allegations were an unexpected coda in a case that had already become embroiled in a broader debate over police conduct in the investigation into the killing of Ms. Vetrano, 30, in August 2016.

The first trial of Mr. Lewis ended in a hung jury in November, after some jurors agreed with the defense theory that the confession was false and the DNA evidence unreliable.

Some of Mr. Lewis’s supporters have gone so far as to assert, without proof, that DNA evidence was planted in order to convict him. Mr. Lewis’s mother, Veta Lewis, has said her son was framed. She has vowed to appeal the verdict.

In court papers filed by the Queens district attorney’s officer, six jurors either denied Mr. Gooley’s claims or said they did not recall the incidents he described.

Two of them testified in court on Monday and said they did not see other jurors pressure Mr. Gooley.

The lead prosecutor, Brad A. Leventhal, argued that the defense “had not made out any claim to disturb this good and valid and fair verdict.” Mr. Leventhal also suggested that Mr. Gooley was lying and that he was seeking “15 minutes of fame.”

But Jenny Cheung, one of Mr. Lewis’s lawyers, argued that Mr. Gooley did not have a reason to lie. Most of his allegations had not been denied, she said, and his accounts to the news media were made anonymously, a move that is inconsistent with someone interested in fame, she said.

Ms. Vetrano’s family have said they have no doubt of Mr. Lewis’s guilt. On Monday, her father, Philip Vetrano, called the defense’s request for a new trial “a joke.”

After the jury received the case on April 1, deliberations became contentious, Mr. Gooley said. He said he had doubts about Mr. Lewis’s guilt, but gave in to the other jurors because he believed that the judge was going to keep the jurors there well into the night until they delivered a guilty verdict.

He said he was also dismayed about technical difficulties that prevented the jury from viewing Mr. Lewis’s videotaped confession. The two jurors said in court, however, that Mr. Gooley had decided after dinner that he did not need to see the confession again.

When the jurors voted to convict Mr. Lewis, it was after 9 p.m. and they had been in the courthouse for about 12 hours.

“I was getting flustered, having migraines, and they were serving food from a pizza joint — not the healthiest,” Mr. Gooley said. “I felt I needed to get out of there.”

He said he noticed during the trial that the judge was wearing purple, which he learned was Ms. Vetrano’s favorite color, and he believed it was a deliberate show of solidarity with the victim’s family.

The judge did not respond to requests for comment.

Mr. Gooley said he tried to send a note to the judge to find out how long the jury would have to stay that evening, but Brian Morrissey, the foreman, ripped up the message.

Mr. Morrissey, in an affidavit, said he did not recall making any statements to Mr. Gooley about his opinion before deliberations, nor did he remember ripping up a note. Mr. Morrissey was not called to testify on Monday.

Mr. Gooley said he told his fellow jurors that he did not believe prosecutors had proven Ms. Vetrano had been sexually abused, and noted the absence of DNA establishing that there had been such an attack. The jurors could convict on the first-degree murder charge only if they also found Mr. Lewis guilty of sexual abuse.

Mr. Lewis’s lawyers said two jurors offered expert opinions about the sexual-abuse evidence based on their own experiences, including with other rape cases, which would have violated the judge’s instructions.

But one of those jurors denied those claims on Monday, while the other acknowledged drawing a comparison between evidence in Mr. Lewis’s trial and another case, but said he dropped the subject at another juror’s request.

Vinoo Varghese, the holdout juror’s lawyer, said that if it were not for the jurors’ actions and the judge’s decision to keep the jurors into the night on the first day, the outcome might have been different.

He said his client was steamrollered. “He was bullied in the jury room,” Varghese said. “That is an insane coercive atmosphere for any juror to be in.”

On Aug. 2, 2016, Ms. Vetrano was killed as she was jogging in Spring Creek Park in the Howard Beach section of Queens.

When investigators learned the DNA found on her body belonged to a black man, they sought samples from hundreds of black men who had been arrested in nearby parts of Queens and Brooklyn.

Detectives focused on Mr. Lewis on the recommendation of a police lieutenant who had seen him on two occasions “acting suspiciously” in Howard Beach, a predominantly white neighborhood.

Mr. Lewis lived three miles away in East New York, Brooklyn, with his mother and had graduated from a school for students with learning disabilities.

The DNA taken from Mr. Lewis matched traces found on Ms. Vetrano’s neck and cellphone, and a mixture sample from two of her fingernails.

Mr. Lewis initially denied killing Ms. Vetrano, but after 11 hours in police custody, he confessed in a videotaped interview to beating her. At times during the confession, he appeared confused and mumbled through some of his responses.