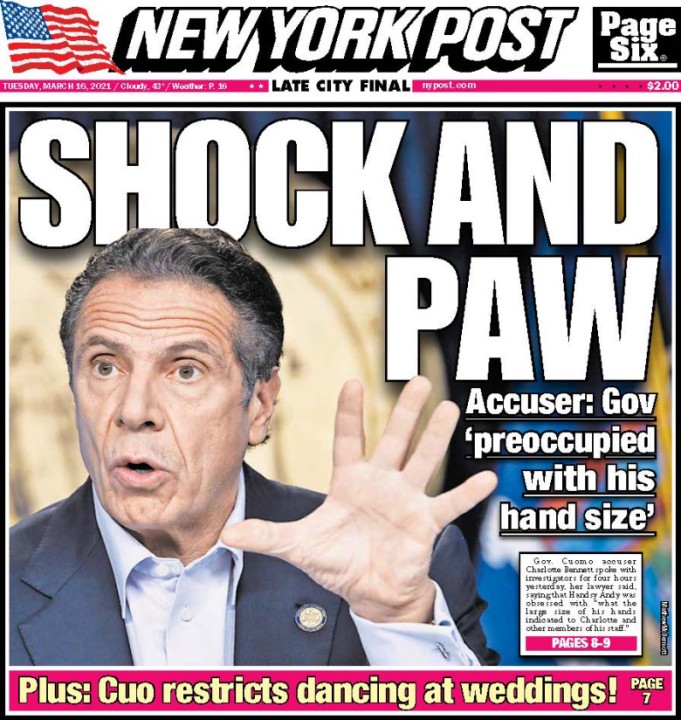 On March 2, 2020, Governor Andrew Cuomo held his first coronavirus briefing. Within days, Cuomo became the media’s gold standard of pandemic management, spawning “Cuomosexuals.” His daily briefings garnered him an Emmy and Pandemic-Cuomo became the “Control Freak” the left needed to counter Trump. Soon, like Trump, he was also a celebrity with a book who enjoyed impenetrable support from his base despite his policy missteps. These folks also loved Cuomo’s regular appearances with his brother on CNN, discussing critical pandemic issues such as which child was their mother’s favorite. A year later with New York’s economy in tatters, the City still mostly shut down, and Cuomo losing multiple legal battles over his lockdown policies to religious groups and business owners, his gubernatorial legacy has been tarnished—perhaps beyond repair. Yet, the calls for impeachment, prosecution, or resignation have come in the last few weeks. If Cuomo goes down, it should be for the way he mismanaged the pandemic leading to thousands of nursing home deaths and the ensuing coverup while writing his book on his self-proclaimed pandemic achievements, not for the recent #MeToo allegations by former staffers.

I was an early critic of Pandemic-Cuomo. The governor committed constitutional violations, which I wrote about the day after he declared the lockdown on March 20, 2020. Cuomo failed to designate criminal defense attorneys as “essential” workers despite deeming cops and prosecutors as such. Though he is an attorney, his omission deprived those facing criminal charges of their constitutional right to one. A day after the New York Daily News published my piece, criminal defense lawyers received the “essential” classification. Subsequently, I told the New York Law Journal that “Cuomo’s hostility [to lawyers] demonstrated a complete disregard for [the] rule of law….”

Nonetheless, what should end Cuomo’s gubernatorial reign was his deadly decision to require nursing homes to accept COVID-19 positive patients. Not only was the policy disastrous, but Cuomo’s attempt to conceal the data is also unsettling at best, criminal at worst, and certainly impeachable. His actions included stonewalling bipartisan support for an independent commission to investigate and then denying requests for the actual number of dead seniors. But Cuomo can’t hide anymore due to the NYS Attorney General’s Report finding that the nursing home deaths were underreported by 50%, the admission by his top aide of a coverup, and the DOJ’s current investigation. Cuomo has hired a defense firm (not mine). And he certainly needs the criminal representation—as he may be looking at federal wire fraud charges potentially landing him in prison for up to twenty years.

Cuomo’s most impeachment worthy and potentially criminal acts, the nursing home deaths and coverup, are being overshadowed, however, by multiple #MeToo allegations. These claims are concerning but not criminal in nature. Without corroboration, the NYS AG also investigating these accusations, will neither be able to prove these against Cuomo nor provide grounds for impeachment. Despite the CBS News or Harper’s Bazaar interviews of former staffers, Cuomo’s #MeToo moment is a distraction from what should remove him from office.

The dwarfing of Cuomo’s nursing home disaster and coverup by his #MeToo reporting can be explained by the cognitive dissonance felt by Cuomosexuals who viewed him as the pandemic savior. Likewise, the media is largely ignoring his overall terrible gubernatorial record leading droves of New Yorkers to flee the State long before COVID-19 lockdowns; in fact New York has been losing residents since 2010 and Cuomo has been governor since 2011. Rather than focusing on his record and the nursing home catastrophe and coverup, the press has even drawn comparisons to one of his fallen predecessors, Eliot Spitzer. If Cuomo falls, however, it will be from a higher place, as Spitzer didn’t have an Emmy. Hopefully when Cuomo’s done, his book publisher will add new chapters focusing on honesty and real success.

Follow us on social media!
Trump Surrendered his Tax Returns… What Happens Now? First Juror Selected in Derek Chauvin’s Trial Has Not Seen the Viral Video